Jeff Milisen Award Winning Underwater Photographer in Kona, HI | Kona Honu Divers
Skip Navigation Website Accessibility
OPERATIONS ARE TEMPORARILY SUSPENDED TILL APRIL 30
Book between May 1 - June 30, 2020 and use code spring2020 for a 30% savings for certified divers at checkout
*Online bookings only. booking is non-refundable when using this code 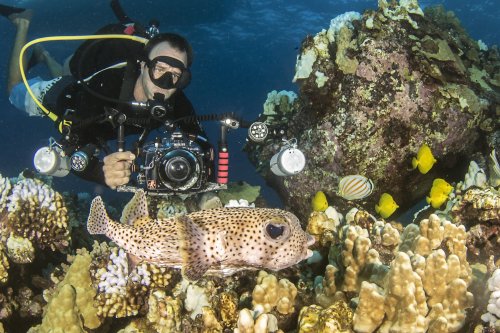 Jeff Milisen has always been an observant naturalist first, and a photographer second.  His image making process has grown from an innate curiosity and nose for adventure inspired by his home: Hawaii.  In school he studied everything  from sharks and rays to coral reefs and even cone snail venom.  Today his interests still encompass everything from plankton to large sharks.  Documentation is always the focus, so the art you see is in the natural beauty of the subject.

His latest splashes have come from his blackwater collection.  For these images, he and KHD diving guests travel 3 miles straight offshore at night, which in Hawaii means floating over 5000 feet of water!  The creatures seen are either plankton that spends its days floating just under the surface (epipelagic) or creepy deep-sea micronekton that migrates to the surface from thousands of feet down every night to feed on the plankton.  The striking photos depict unusual cephalopods, larval fishes and miscellaneous invertebrates that many biologists have never heard of before.

So his nights are often spent dangling in the dark middle of the ocean, but his favorite days are spent tussling with oceanic whitetips, tiger sharks, dolphins and any other ocean-going giant that might cross his path.  Jeff’s photography has won accolades in international contests such as Ocean Art, Ocean Views, Our World Underwater, and Beneath the Sea.  Wherever aquatic life may spring forth, Jeff will follow painting his subjects in the best light he can find!

Jeff has won numerous competitions here are a few: